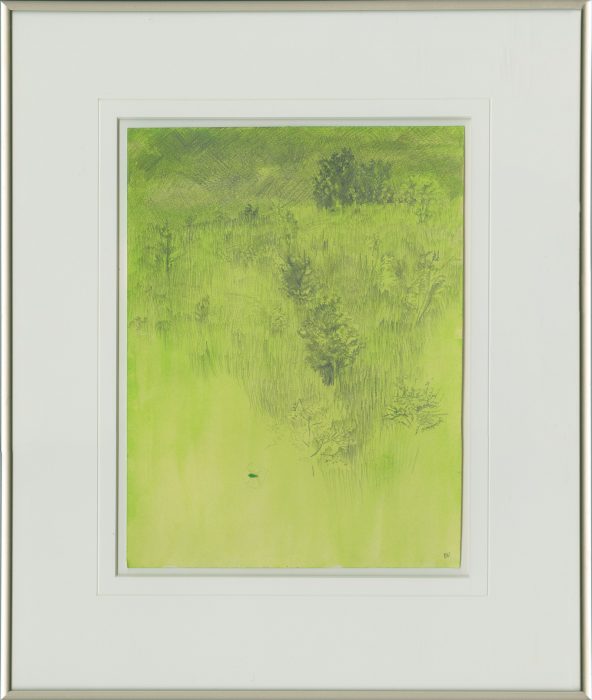 Bernice Vincent (1934-2016), was born in Woodstock, Ontario and is a widely recognized London-based artist. Vincent moved to London in 1952 to attend H.B. Beal Technical School, where she studied with several influential London artists including Herb Ariss, Mackie Cryderman, and John O’Henly. In 1954 Vincent traveled on scholarship to the Instituto Allende in San Miguel de Allende, Mexico to take courses in painting, anatomy, watercolour, lithography, and fabric painting. The emphasis on abstraction in Mexico did not resonate with Vincent and when she returned to London she felt a need to develop a more individual sensibility in her art making. In an extra-curricular drawing class she met her future husband Don Vincent, whom she married in 1956. She was producing artwork in the 1950s and 1960s but still struggling to find her own voice. Through Don, who was also an artist and photographer, she was introduced to London regionalism’s main proponent, Greg Curnoe. Regionalism in London emphasized being rooted in one’s community. As a key figure in London’s cultural scene, Vincent helped establish one of the area’s first artist-run centres, Region Gallery, in 1962 and maintained an active presence in group and solo exhibitions at numerous galleries in town. It was between 1975 and 1979 that she established a name for herself with her first major solo exhibition held at Forest City Gallery.

Bernice Vincent depicted the London area in her paintings from multiple perspectives including numerous picturesque series of skylines and intimate views of her own daily circumstances. Her work often captures time as though frozen. These representations draw attention to the heavy temporality of seemingly insignificant moments, and the compelling richness of fleeting experiences. She earned her place in London’s flourishing 1960s art scene with her ability to turn mundane everyday objects into realist paintings, often with a surrealist tone. Working with objects or landscapes from real life, rather than photographs, Vincent’s paintings required a long process of looking. She had been working in the realist style since the 1960s, well before Jack Chambers had developed his theories of ‘perceptual realism’.

Medium:
graphite and watercolour on paper