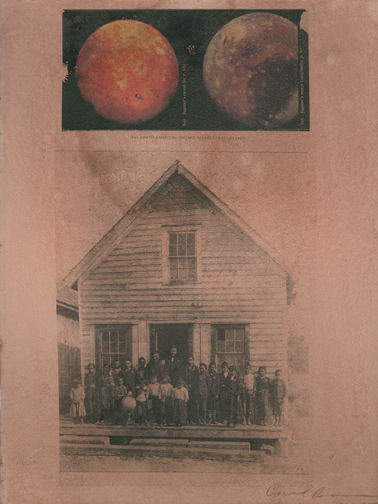 Carl Beam R.C.A. (May 24, 1943 – July 30, 2005), born Carl Edward Migwans, made Canadian art history as the first artist of Native Ancestry (Ojibwe), to have his work purchased by the National Gallery of Canada as Contemporary Art. A major retrospective of his work, mounted by the National Gallery of Canada, is on exhibition starting October 22, 2010, recognizing Beam as one of Canada’s most important artists. He worked in various photographic mediums, mixed media, oil, acrylic, spontaneously scripted text on canvas, works on paper, Plexiglas, stone, cement, wood, handmade ceramic pottery, and found objects, in addition to etching, lithography, and screen process.

Carl Beam is an artist who works in a variety of media to explore the tensions between Western and Aboriginal relations. In his autobiographical work, he references himself as an Ojibwa, and places his Native culture within broader surroundings. He brings to attention problems that affect contemporary Native cultures and shows, through his juxtaposition of images, how these concerns relate to larger world issues. Through his work Beam integrates personal memory with issues related to the environment, brutality, and a rethinking of the ways histories are told….Beam employs a range of media, including painting, printmaking, and sculpture. The collage and photo-transfer techniques he often uses allow him to visually bring together subjects and events from different historical moments that he infuses with political commentary. His contemporary art-making strategies serve and empower his engagement with the struggle of Aboriginal people in the late 20th century.- excerpt National Gallery of Canada