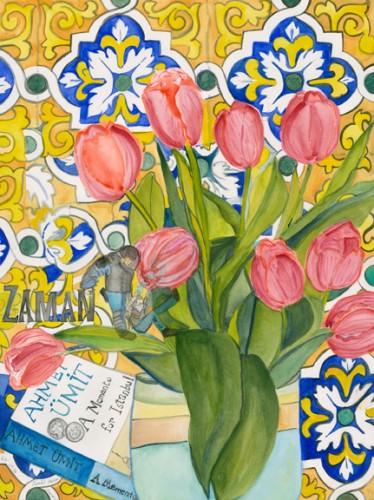 Jamelie Hassan is a visual artist who is also active as a lecturer, writer, and independent curator. She was one of the founders of two artist-run centres in London, Ontario: the Forest City Gallery (1973-present) and the Embassy Cultural House (1983-1990), organizing both national and international programs. Her work is represented in numerous public collections in Canada and internationally, including the National Gallery of Canada (Ottawa); the Art Gallery of Ontario (Toronto); Museum London (Ontario); the Vancouver Art Gallery; and the Library of Alexandria (Alexandria, Egypt). Her works toured recently in international exhibitions, including Digital Silk Routes and In Order to Join: the Political in a Historical Moment, organized by Museum Abteilberg in Monchengladbach, Germany (2013-14) and toured to Mumbai, India in 2015. A mixed media, site specific artwork titled Nur (Qur’an, sura 24:35; The Light Verse) was installed in 2014 on the ceiling of the library of the Great Mosque in Xi’an, the ancient capital of China where the “Silk Road” began. A book by the same title was published in 2015 by Blue Medium Press documenting Jamelie’s gift to the Great Mosque with the support of the Xi’an Art Museum. Jamelie Hassan lives and works in London, Ontario.

Zaman means “today” in Turkish, originating from the Arabic word ‘time’. It is the main newspaper in Turkey and publishes an English language edition.  On a trip to Istanbul in Dec. 2015, Ron Benner and I found that Zaman’s opinions and news reporting was quite critical of the Erdogan government. Recently, news media publishers, editors and journalists have been under threat by the Turkish government. The editors of Zaman were fired and the paper was taken over to be a mouth-piece of the increasingly oppressive Erdogan regime.  The original watercolour that this work is from was completed during the lead up to the take-over of Zaman. Tulips originated in Turkey and patterned ceramic tiles, also featured in this work, are common to Turkey and the Middle East region.