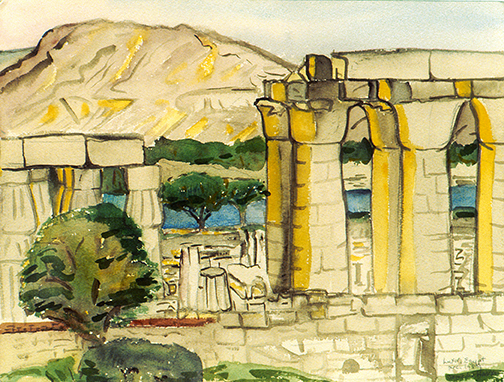 Jamelie Hassan is a visual artist based in London, Ontario. Her works are in major public collections and her commissioned works involve highly diverse sites including the Ottawa Courthouse and Land Registry and the London Health Centre. In 2001 she was awarded the Governor General’s Award in Visual and Media Arts and the Canada Council for the Arts international residency program in Paris, France in 2012. She was a recipient of the “Canada 125” Medal for outstanding community service in 1993. She received an honorary doctorate in visual arts from OCAD University, Toronto in June 2018.

This artist proof is a singular digital print of an original watercolour which I painted in Luxor, Egypt. This was the view from my hotel window which was a modest hotel that overlooked this archaeological site in the heart of the city of Luxor. An edition of cards was published at the time. The original watercolour is in a private collection in Toronto. This digital print was one of the first watercolours printed by Roland Schubert in this process in 2006 and is framed in an antique wooden frame acquired from Colour by Schubert’s collection of antique frames.