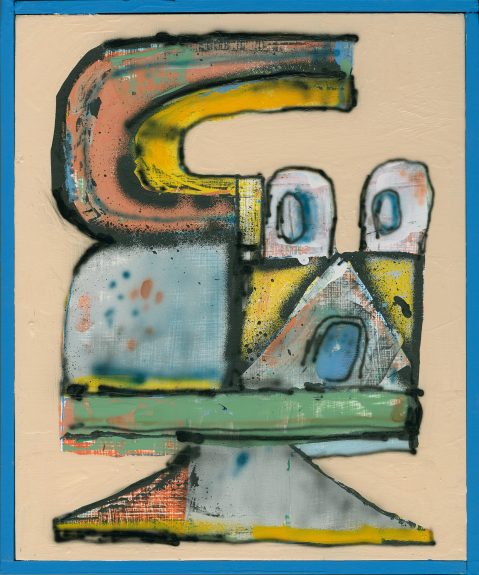 James Kirkpatrick works in a variety of media including, drawing, painting, avant-garde hip-hop and electronic music, sound sculptures, murals, zines, comics, and mask-making.  His paintings and sculptures incorporate sculptural, kinetic, and auditory elements, as he combines his 2D aesthetic with circuit-bent electronic toys. Likewise, compositions written on modified Gameboys and circuit-bent sounds have become part of his music and on-stage performances as Thesis Sahib. James is represented by the Michael Gibson Gallery in London Ontario.

Recently I have begun to explore reinterpretations of words and individual letters  that represent friends, collaborators, events and songs of significance to myself, places I travel  and my time alive in the region of London.   The letter S stands for the first letter in a few alternative names and names of recent I have used over the years to represent my art. For this reason a music collaborator of mine, Jesse Dangerously sampled a song called MR. S. from an old Alphabet record. He built a beat out of this sample for me to do vocals over from this record. The song has never been recorded and we often joke about how we never finished it. While Jesse was in London teaching workshops in line with my exhibition “TO THE UNSEEN FUTURE” at the Judith and Norman Alix Art Gallery in Sarnia, I painted the MR S. painting.

Medium:
spray paint and acrylic on board