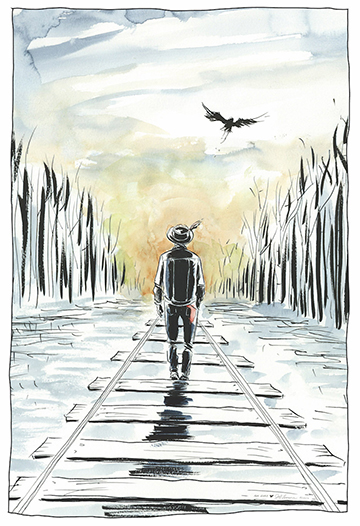 From the Collection of Diana Tamblyn and David Pasquino

Born and raised in Southwestern Ontario, Jeff Lemire has gained a reputation as one of Canada’s foremost graphic novelists. He is the award winning, New York Times bestselling author of such graphic novels as Essex County, Sweet Tooth, The Underwater Welder, the Secret Path, Roughneck and more.

In 2016, “The Secret Path” – an album written by Gord Downie, a graphic novel drawn by Lemire, and an hour-long television special combining the songs from the album with animation by Lemire debuted. It told the story of a young Anishinaabe boy named Chanie Wenjack, who passed away while trying to get back to his family following his escape from a residential school. This drawing of Gord Downie was originally made by Jeff Lemire as a gift to Mike Downie (Gord Downie’s brother). The image was then made available as a print, with proceeds going to the Downie Wenjack Fund.