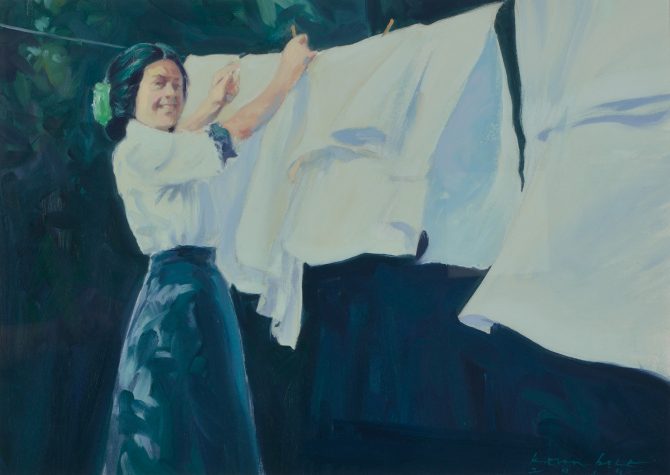 Kevin works in a variety of media, including oil paint, charcoal, India ink, watercolour, and soft pastel. His development as an artist has been self-directed though strongly influenced by many people, most notably his father Dr. Clare Bice.  Kevin was one of the organizers of “The River Project” (2008) and, since 1992, the London Artists’ Studio Tour.  He works at home in his studio and outdoors on location across Canada, as well as in England, Scotland, Italy and France.  Other passions are travel, music and theatre.  He has led many groups on sketching and art tours primarily in Italy and France.  His theatrical efforts have been rewarded with two Brickenden Awards for set design – “The Drawer Boy” (2003) and “K2” (2004).

“Hanging Out” is one of an on-going series of paintings and drawings which reflect my fascination with old photographs.  Old photos, particularly informal ones from family albums, can be both distant and intimate.  They are made distant from us by the simplified tones of black and grey, by loss of detail, by unfamiliar clothing and settings and sometimes by the slightly damaged quality of the photo.   At the same time, the often direct gaze of the person or persons in the photo combined with their casual or playful attitude create a strong personal connection with me.  In my paintings and drawings, I have been trying to find ways of making that connection for viewers of my work.  The woman in “Hanging Out” was a neighbour and friend of my mother when she was a teenager.