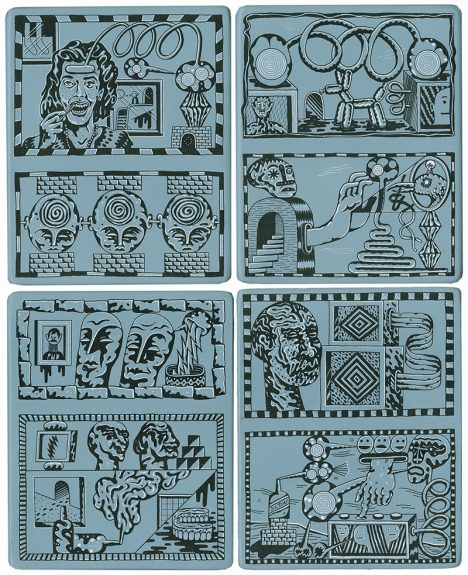 Billy Bert Young was born in London, Ontario in 1983. He graduated from H. B. Beal Secondary School in 2003, where he was introduced to the drawings and zines of Marc Bell and Peter Thompson and the graffiti work of James Kirkpatrick’s (AKA Thesis Sahib). In 2004 he moved to Halifax, Nova Scotia where he graduated with a BFA from the Nova Scotia College of Art and Design with a major in printmaking. While in his second year at NSCAD he purchased the book NOG-A-DOD: Prehistoric Canadian Psychedooolia, an anthology of like-minded artists edited by Marc Bell. In this book he was introduced to the work of Jason Mclean and Amy Lockhart, among others. During his time in Halifax he exhibited work in several group and solo shows. In 2008 he moved back to London to be close to family and to work with local artists that had influenced his work in the past. Since then he has made collaboration a main component of his practice; creating zines, drawings and murals alongside fellow artists such as James Kirkpatrick and Jason McLean. Billy Bert Young is represented by Michael Gibson Gallery and his work can be found in the collections of Museum London and Art Gallery of Ontario, among others.