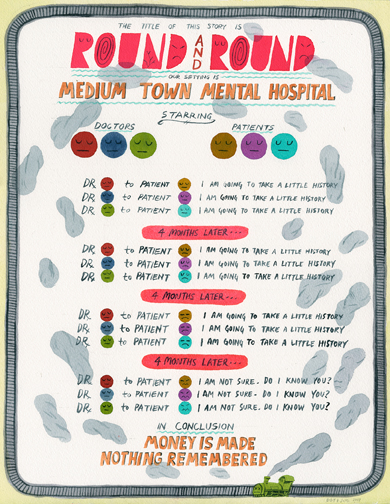 Title Round and Round
Medium Watercolour on Arches Paper
Image Size 15 x 19 in.

Billy Bert Young was born in London, Ontario in 1983. He graduated from H.B. Beal Secondary School and in 2008 received a BFA from the Nova Scotia College of Art and Design with a major in printmaking. During his time in Halifax he exhibited work in several group and solo shows. In 2008 he moved back to London to be close to family and to work with local artists that had influenced his work in the past. Since then he has made collaboration a main component of his practice; creating zines, drawings and murals alongside fellow artists such as James Kirkpatrick and Jason McLean. Billy Bert Young is represented by Michael Gibson Gallery, in London, Canada.

Jim Miller was born and raised in London, Ontario. He studied Math and Physics at University of Western Ontario. As a participant of the New School of Colour Jim found interest in conceptual expression. Living half a century as a “psychiatric survivor” help to inform the central themes of Jim’s work. He continues to live in London with his wife of 30 years, Mary Miller. This is the first time Jim Miller has been included in an art exhibition.

Jim Miller and I were first introduced in December, 2016, with the intention of collaborating on artwork.  We never spent time creating work together but instead getting to know each other. Over a few months he would show me his concepts for artwork.  A favorite of mine was his idea entitled “Round and Round” – an account of a shared dissatisfaction toward practices within the healthcare system.  I helped Jim realize the concept by creating a watercolour painting from his original notes. Accounting for all Jim’s specified details included a continuous train track framing the work that symbolized “no way out”.
-Billy Bert Young