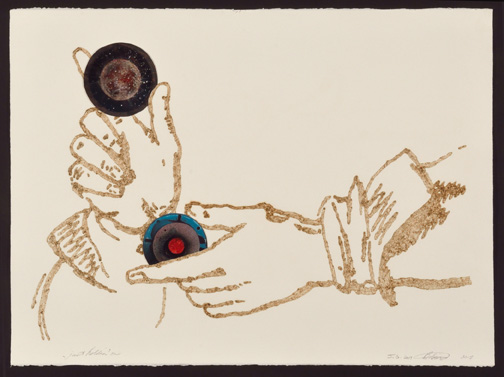 David Bobier’s work has been exhibited across Canada, in the United States and United Kingdom, with important touring exhibitions in Ontario and the Atlantic provinces. He is currently partnering with the Inclusive Media and Design Centre at Ryerson University in researching and employing vibrotactile technology to create vibratory ‘compositions’ and to investigate broader applications of the sensory interpretation and emotionality of sound and vibration in art making.  Bobier is Founder/Director of VibraFusionLab, London, ON that uses a holistic approach to considering vibration as a language of creation and exploration, Founder and Past Chair of London Ontario Media Arts Association, Founder and Co-Chair of Tangled London, Executive Board Secretary of Media Arts Network Ontario and Board member of Artist Run Centres and Collectives of Ontario. He is also co-partner with artist Leslie Putnam in the o`honey collective.

Jack Gallagher is an Art Promoter, Collector, Painter and Sculptor. He has a double minor in Art History and World Religions, and a few credits shy of an Honours B.A. Visual Arts – University of Windsor. He was the proprietor of the Jack of Arts gallery/studio in London, Ontario from  2007 to 2008. Jack has exhibited at Museum London, Soho Art Club, Covent Garden Market, London Arts Council, Andy’s Reggae Gallery, University of Windsor-Essex County Library, Dumouchelle Art Gallery, Detroit Michigan and has artworks in over 100 private collections in North America, South Africa, Croatia, Trinidad, and New Zealand.

My first reaction upon seeing this completed work was that it has the power to capture one’s attention and while gazing upon it the words of William Blake echoed through my mind and heart –
To see a World in a Grain of Sand
And a Heaven in a Wild Flower
Hold Infinity in the palm of your hand
And Eternity in an hour.
… when that happened I knew that David and I had created something strange and wonderful. I was delighted to offer such a transcendent work to the Unity Project. – Jack Gallagher