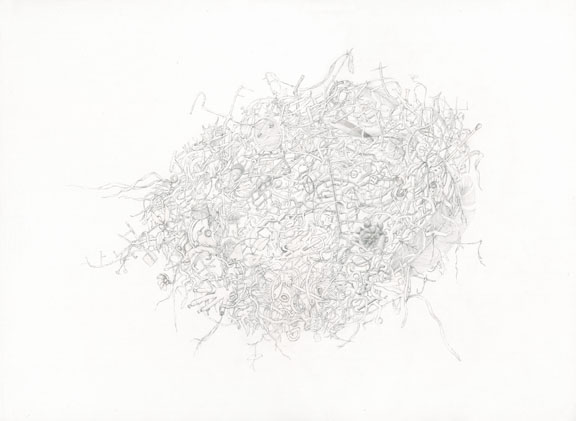 David Merritt’s practice operates in the diminishing space between human and non-human systems. His drawing, sculptural and multimedia works have been exhibited in galleries nationally and internationally, including the National Gallery of Canada, Art Gallery of Ontario, the Textile Museum of Canada and TENT CBK, Rotterdam. A touring survey exhibition, shim/sham/shimmy was circulated by Museum London in collaboration with the Art Gallery of Hamilton, the MacLaren Art Centre and the Art Gallery of Windsor in 2010. Merritt lives in London, Ontario, where he teaches at Western University in London. His work is represented by Christie Contemporary, Toronto.

Music was Marshall Custus’ main creative hobby when he moved to London in 1979, doodling was a quieter pastime. In 2005 his mother and daughter gave him books, and encouragement, to learn more about drawing. Two years later he was homeless and depressed. The London shelter system was able to help him reassess his situation. The Unity Project contributed to his stability by facilitating in his social assistance application and talking to landlords. Marshall uses sketching as a focal point to achieve inner peace, especially during troubles, and now shares the value of creativity with others.

As a collaboration, this project was quick to conceive and a challenge to execute. A basis for the drawing evolved quickly from ideas offered at the outset by both artists- weaving a structure comprised of ready-at-hand elements. The work began by drawing together to lay a foundation before taking turns individually, responding by adding, adjusting, and developing detail. The artists, Marshall Custus and David Merritt have a number of common interests- the conversation starts with drawing in graphite, and their mutual preference for relative simplicity.