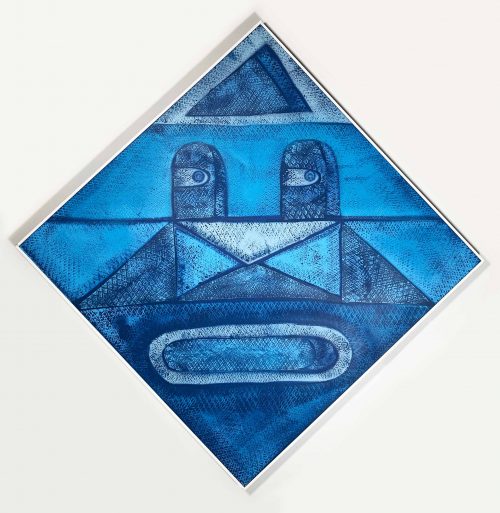 Well known for his participation in the early Canadian avant-garde hip hop movement as Thesis Sahib, Kirkpatrick works in a variety of media including, drawing, painting, sound sculptures, murals, zines, comics, and mask-making. He incorporates kinetic and auditory elements, combining his 2D aesthetic with altered electronic toys and compositions on modified Gameboys that have become part of his music and on-stage performances as Thesis Sahib and the European band AWARDS.

In August of 2019 I completed a large mural on Dundas and Richmond commissioned by the Dundas Place Initiative. In the mural I am exploring ideas of how individuals play a part. Each separate figure depicted is free from indication of gender or cultural background. They come together to unite into one large entity that looks to its right (left down Dundas street) towards the Courthouse, Museum London and the Forks of the Thames river. This piece is one key character taken from that mural.