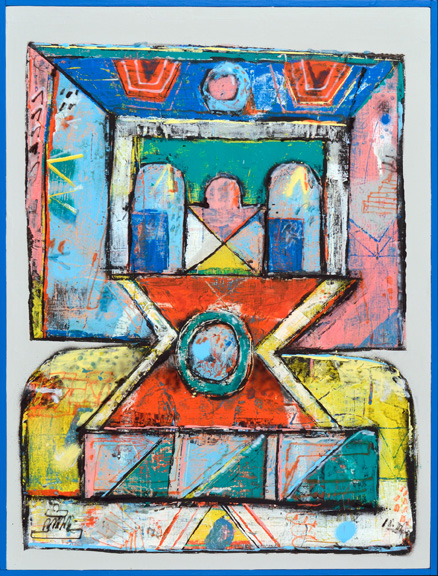 Born in London, Ontario in 1977, James Kirkpatrick studied art at H.B. Beal Secondary School before receiving his BFA at Halifax’s Nova Scotia College of Art and Design in 2002. He has exhibited his work extensively throughout the US and Canada including shows in New York, Boston, Los Angeles, San Francisco, Miami, Halifax, Toronto and Vancouver. Kirkpatrick works in a variety of media including, drawing, painting, avant-garde hip-hop and electronic music, sound sculptures, murals, zines, comics, and mask-making. His paintings and sculptures incorporate sculptural, kinetic, and auditory elements, as he combines his 2D aesthetic with circuit-bent electronic toys. Likewise, compositions written on modified Gameboys and circuit-bent sounds have become part of his music and on-stage performances as Thesis Sahib. He currently lives and maintains a studio in London, ON, where he is represented by Michael Gibson Gallery.