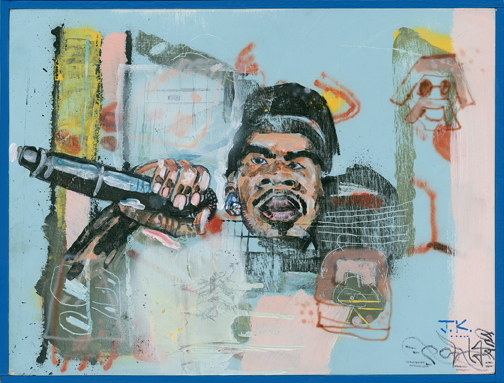 Title The Rapper
Medium acrylic, spray paint and maker on board
Image Size 12.5 x 16.5 in.

Born in London, Ontario in 1977, James Kirkpatrick studied art at H.B. Beal Secondary School before receiving his BFA at Halifax’s Nova Scotia College of Art and Design in 2002. He has exhibited his work extensively in museums and internationally. Known for his participation in the early Canadian graffiti movement and as avant-garde hip-hop artist, Kirkpatrick works in a variety of media including drawing, painting, sculpture, zines/art books, mask-making and experimental sound improvisation.  James Kirkpatrick lives and maintains a studio in London, ON where he is represented by Michael Gibson Gallery.

Ryan Irwin has been involved in the art scene for many years. He started as a graffiti artist but now mainly works on canvas. Ryan has the ability to change his style and approach frequently and his techniques continue to evolve. Ryan has experienced homelessness and mental illness and is now supported through London CAReS. Ryan continues to find peace of mind through his art and is working toward stability in his life with the help of London CAReS.