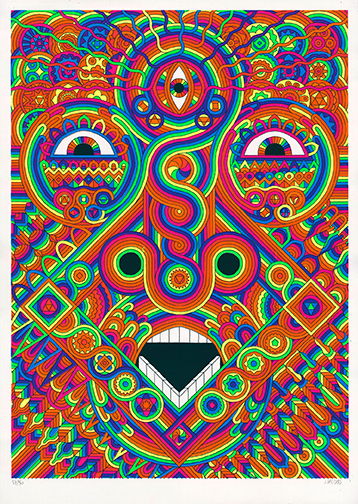 Jesse Jacobs is known for his precise and detailed line work in combination with bold and simple colour palettes. His comics contain an affiliation with psychedelia, spirituality, and alternative realities. His books By This Shall You Know Him (Koyama Press, 2012), Safari Honeymoon (Koyama Press, 2014), and Crawl Space (Koyama Press, 2017) have been translated into several languages, with the latter winning the Doug Wright Award for Best book. His stories have been selected for the 2012, 2013, and 2015 editions of Best American Comics.

My work is focused on the creation of self-contained worlds that seem both familiar and fantastical. I am interested in using the medium of comics to investigate the inexplicable aspects of this reality. My drawings and writing deeply inform one another and have evolved together to construct a highly stylized body of work. In my comics, I aspire to utilize and explore the true uniqueness and potential of this contemporary language. This screenprint is based off the cover image from my book Crawl Space, winner of the 2018 Doug Wright Best Book Award.