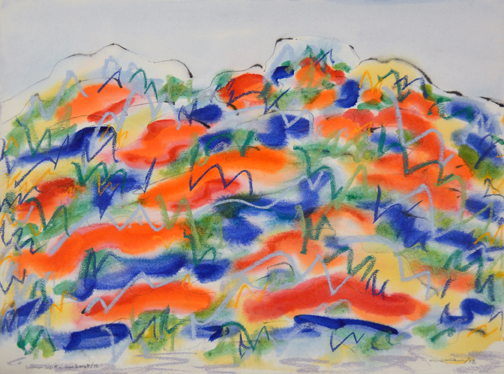 Inspired by the colours and patterns found in nature, K.M. Graham took up painting later in life, after the death of her husband (Wallace Graham, a medical doctor) in 1962. Educated at Trinity College, University of Toronto, Graham was well-travelled and frequently visited local galleries. As a docent at the Art Gallery of Toronto, Graham had the opportunity to observe art on a regular basis, and became especially interested in the works of Piet Mondrian and the American colour field painters, whom she felt were able to distill the essence of their subject. Encouraged by her friend Jack Bush, a Canadian abstract expressionist painter, Graham mounted her first exhibition at the Carmen Lamanna Gallery, Toronto, in 1967. In 1971, she visited Cape Dorset, the first of many trips to the north. Struck by the colour and light of the landscape of the Arctic and Newfoundland, Graham’s art evolved from close-up, highly abstract views of flowers and lily pads, to a wider focus on the topography of this region. A member of the Royal Canadian Academy, Graham participated in several notable group exhibitions, such as “The Heritage of Jack Bush” at the Robert McLaughlin Gallery, Oshawa (1981-82), and “Fourteen Canadians: A Critic’s Choice,” a series of works selected by critic Andrew Hudson to be shown at the Hirshhorn Museum and Sculpture Garden, Washington, D.C. (1977).

From the Collection of Gerald Pedros