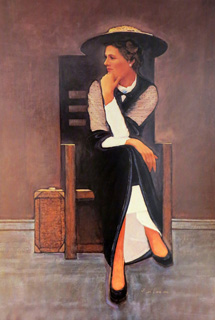 The late artist Klaas Willem Verboom was born in London, Ontario in 1948. He began painting around the age of ten in his, then rural, neighbourhood of Pond Mills. Like many London artists of his generation, he received his formative training at H.B. Beal Secondary School, where he was a student of the late London artist Herb Ariss who was known for his impressionistic landscape paintings. Verboom, received an entrance scholarship to the Ontario College of Art, (Toronto), where he graduated in 1970. Early in his career his work was represented by Nancy Poole’s Studio and later, for many years, by the former Sandy Snelgrove’s Gallery, both of London.

This portrait of Klaas Verboom’s widow, Paulette, was painted several years before the two married. Paulette was modelling for an Inmont Paints calendar photo shoot involving old cars and period costume. Klaas was just taking some photos on the set and captured this image of Paulette in between photo shoots. However, this work was originally donated to us with the understanding that the work references a London historical scandal about a Minister and his mistress, Paulette, depicted here leaving (or being run out of) town. UPwithART organizers contacted Paulette (formerly Verboom) who set the record straight, providing an image of herself in that same costume from the Inmont Paints catalogue. She has no knowledge of said scandal. Maybe Klaas was operating at two levels in this portrait? If anyone can shed further light, please let us know.