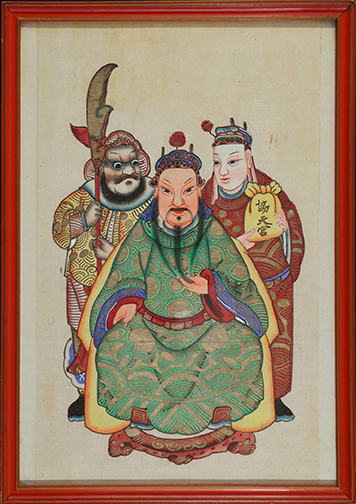 Liu Bei, Guan Yu and Zhang Fei, are greatly respected in Chinese lore as heroes of social justice and symbols of fraternal loyalty. The three swore an oath of loyalty – Oath of the Peach Garden – at the end of the Eastern Han dynasty around the time of the Yellow Turban Rebellion in the 1800s C.E. They play important roles in the establishment of the state of Shu Han during the Three Kingdoms period and are popularly known for their acts of vigilante justice, exacting payment from the rich who have wronged society and redistributing the wealth to the poor.

Though “pith” is a particular type of paper, the term is also used to describe a style of Chinese painting on rice paper. Pith paintings were widely produced in the 19th Century, in response to demand for small, inexpensive and easily transported souvenirs, following the massive growth in the China Trade. Albums of pith paintings were inexpensive, light, easy to pack and gave the pictures some protection for the voyage home. Hanging them in strong light soon gives them a washed-out look.