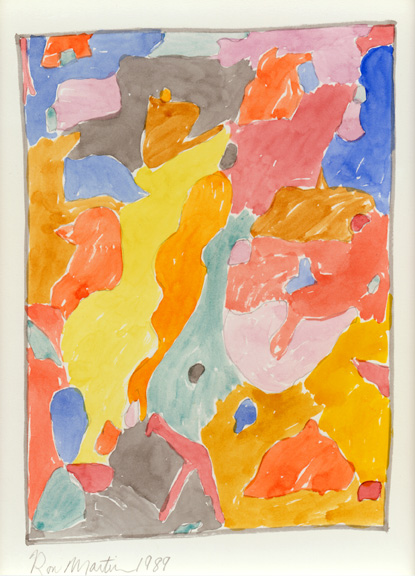 From the Collection of Brian Meehan

Ron Martin was born in London, Ontario in 1943 where he set-up his first studio with Murray Favro. He was one of the original members of the Forest City Gallery and was influenced early in his career by Greg Curnoe. Ron Martin was one of a small group of painters in Canada that considered the act of creating a work a type of performance, which served to remind the viewer that their experience of a material object, such as a painting, was rooted in an experience of themselves.

Martin has had an active studio practice since 1965 with numerous solo and group exhibitions across Canada, in New York, Germany, Japan and France. He is included in a number of major exhibitions including biennials and group exhibitions at the National Gallery and the Art Gallery of Ontario. He is the recipient of numerous awards and grants, is an independent curator, musician and writer and is represented in numerous private and public collections including the National Gallery of Canada, Art Gallery of Ontario, Vancouver Art Gallery, Montreal Museum of Fine Arts and Museum London.