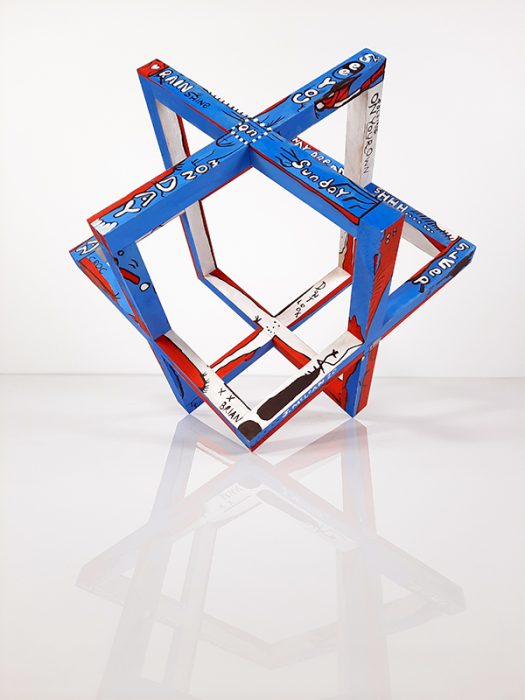 Jason McLean’s drawings, paintings, and sculptures are idiosyncratic visual records of his experiences, observations and perceptions. His frenetic artworks include rich annotations and carefully-researched fragments of personal and social histories. McLean’s drawings act as diaries that pictorially represent his relationship with local environments. His works are often described as mental maps, where samplings of his daily observations are mashed-up into anti-heroic, yet poignant combinations. Working in this way, McLean uses humour to touch upon challenging subject matter, such as sadness, loss, displacement, mental illness and economic hardship.

Ross Bell is a sculptor who lives here in London and currently works at Museum London as the Chief Preparator. His practice involves the use of wood, metal and other construction materials to create geometric abstract forms that focus on the incorporation of negative space formed between the object and the architecture or environment around it. After graduating from the University of Guelph MFA program in 2000 he moved to Toronto and maintained a studio practice there for over ten years. He has exhibited work in Canada and the US in both solo and group exhibitions. His work has been reviewed in periodicals such the Globe and Mail (Gary Michael Dault), Toronto Star (Murray Whyte) as well as being mentioned the NY Times and the Baltimore City Paper art sections. You can find more information and images of past projects at rossbell.ca.

“Sleeping on Sunday,” by Ross Bell and Jason Mclean, is part of a collaborative series that will debut at Gallery Stratford in Winter 2021. By combining their own individual styles, they pay homage to the “cut up” technique developed by William Burroughs and Brion Gysin of the Beat Generation.