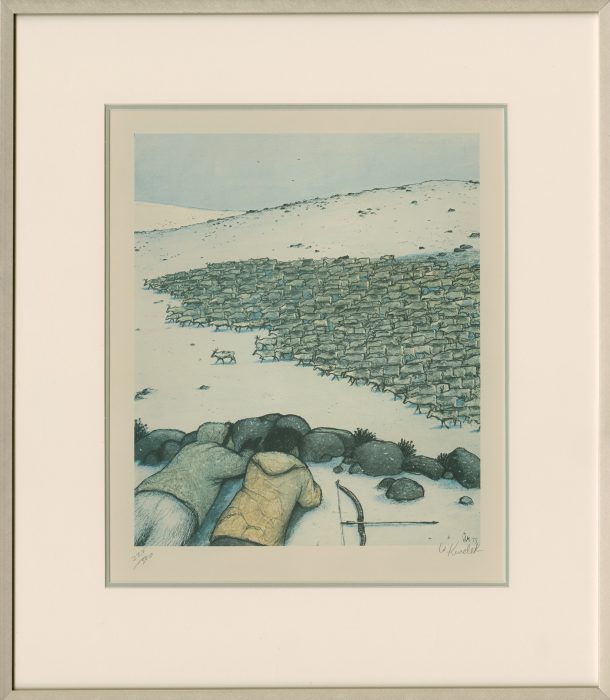 From the Collection of Antony and Joy Abbott

William Kurelek was born of Ukrainian parents near in 1927 in Whitford, Alberta, and as a child, he moved to Manitoba, where memories of the harsh and happy experiences of growing up on a farm would later provide subject matter for his art. In 1949, the year he graduated from the University of Manitoba, the family moved to Ontario, and Kurelek enrolled at the Ontario College of Art in Toronto. Although he was attracted to the work of teachers such as Carl Shaefer, whose rural theme impressed him, Kurelek stayed only for one year, then travelled to Mexico to see the murals of such artists as Diego Rivera, whose social conscience and devotion to the culture and dignity of ordinary people touched him profoundly. Kurelek returned in Toronto in 1959 and worked as a framer at the Isaacs Gallery. Kurelek held his first exhibition in 1960. He won a popularity as a writer and an illustrator of children’s books, which drew on his youthful experiences on the farm. He died in Toronto in 1977.

William Kurelek created between an estimated 2,000 and 4,000 works of art in less than thirty years. Prolific and driven, he created easel paintings, massive murals, singular tableaus, and narrative series with multiple works. His was a diverse, even divided, oeuvre that oscillated between the nostalgic and the nightmarish. Although his early paintings are inward-looking, precise, and claustrophobic, Kurelek’s mature work is marked by more general visual propositions about the fluctuating world around him and the common struggles that divide and bind the human family.