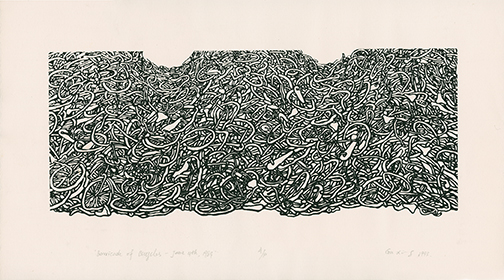 From the Collection of Barbara & Patrick Mahon

Gu Xiong was born 1953 in Chongqing, Sichuan, China. During the Chinese Cultural Revolution, Xiong was sent to live in the countryside at the age of 18. He received a BFA and an MFA (1985) from the Sichuan Fine Arts Institute. In 1986 he attended a residency at the Banff Centre, the first artist from the People’s Republic of China to do so. After returning to China, he was a part of the 1989 China Avant-Garde exhibition that was shut down by the Chinese police, four months before Tiananmen Square protests of 1989. Xiong now lives in Vancouver, where he is a professor of art at UBC.