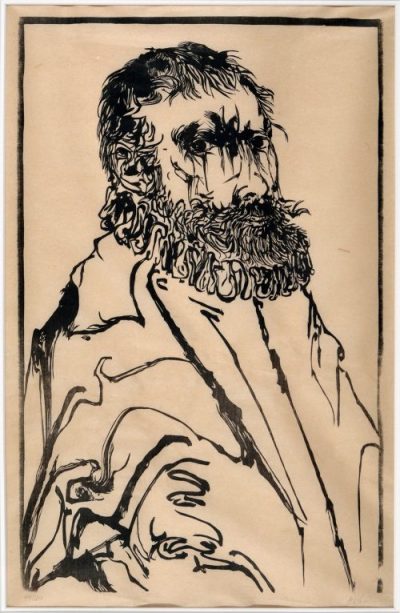 From the Collection of Antje and David Laidler

Born on August 12, 1922 in New Brunswick, NJ, Baskin went on to study at the Yale University School of Fine Arts, where he founded the Gehenna Press. He later moved with his family to Devon, United Kingdom, where he spent much of his time with the iconic couple Ted Hughes and Sylvia Plath—who famously dedicated her poem titled Sculptor to him. Today, Baskin’s works are in the collections of the Art Institute of Chicago, The Museum of Modern Art in New York, the Museum of Fine Arts in Boston, the National Gallery of Art in Washington D.C., the Los Angeles County Museum of Art, and the Philadelphia Museum of Art, among others. Baskin died on June 3, 2003 in Northampton, MA.

This piece is a drawing of Jacob de Geyhn, a 17th century Dutch painter and engraver. We purchased it as part of an International print show and sale in the later 1970’s at a fundraiser for the new Museum London to be built, the event took place in the old public library where the Gallery at that time was housed. The piece came was donated for that fundraiser by Gallery Moos, Toronto, Ont.