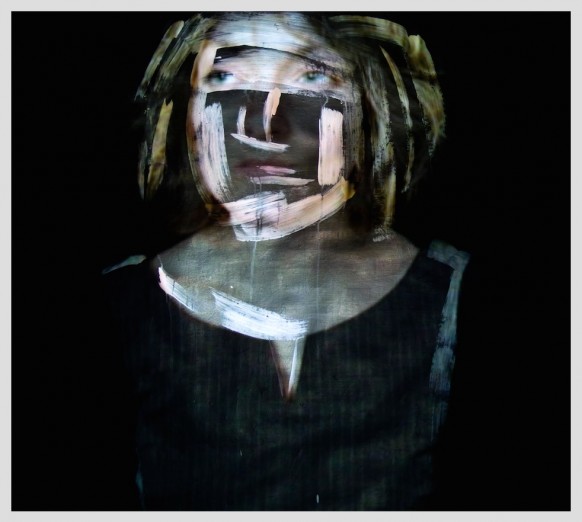 Alexandre Sannen was born in Brussels, 1984. He studied the history of philosophy, of French literature, fine arts and theatre in Brussels, Saint Petersburg and Berlin. He learned drawing from the Russian Graffiti maker Vitaly Fedosov in Astrakhan, and later moved to Berlin where Alessandro Senzacqua taught him to paint. After several solo and group shows with Eli Skadvet, Sasha Zivkovic, Nicole Noirfalise in Berlin and Brussels, he came to Canada where he continues to develop his art practice while working on a PhD in French Studies. Sannen’s postmodern practice is informed by the history of fine arts – based on traditional techniques and use of new technologies. He draws from a variety of European aesthetics based on the gesture, such as the CoBrA avant-garde, and combines this with figurative tendencies of today’s international art scene.

01. Spectre is the first artwork of a series inspired by Derrida’s Specters of Marx, which, at the end of the Soviet Union, showed how past and present respond to a certain kind of dialectic, being inseparable and in constant change. Alexandre Sannen utilizes images from a previous artwork titled Faces: a short film he directed in Berlin in 2010 which reproduces the aesthetic of the early German cinema of the 1920, such as Nosferatu or Metropolis. Rushes of his short film are painted on each character with a quick gesture generated in the instant of the emotion. The consequential artwork confronts the past video work and the present of painting. 01. Spectre can be interpreted as a postmodern crossroad of figurative artwork related to the use of video and photography, and an abstract one based on the gestures of inherited abstract avant-gardes such as CoBrA, the Action painting and Neo-expressionism.