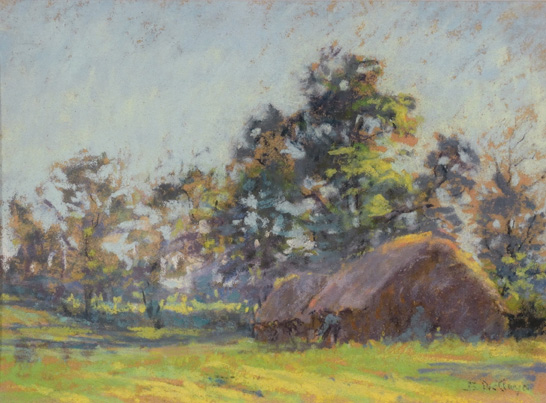 Born in Aberdeen, Scotland, Berthe Des Clayes studied at the Bushey School of Art in England with B. Herkomer and at the Academie Julian in Paris, France with Tony Robert-Fleury and Jules Lefebvre. She lived in London, Canada (1906-1912), then Montreal in 1912-1919 before settling in Chorleywood, England until 1931. She returned to Montreal until 1951 and lived in Devon, England, from 1967 until her death the following year, at the age of 91.

During her career she won the Jessie Dow Prize twice. She regularly attended the Spring Exhibition held at the Museum of Fine Arts in Montreal and the annual exhibitions of the Royal Academy of Arts of Canada. She illustrated the Canadian landscape in two books: Here and There in Montreal and the Island of Montreal by Charles W. Stokes.

Berthe Des Clayes was an Associate Member of the Royal Canadian Academy of the Arts.

From the Collection of Brian Meehan