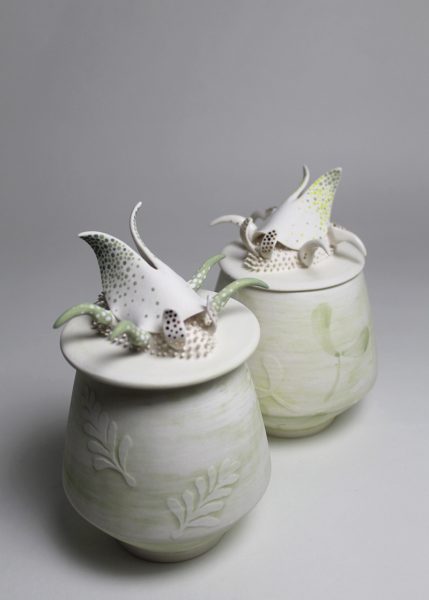 From the Collection of John and Marg Nicholson

Daumante was born in Lithuania and moved to Ireland in 2007. She graduated from the National College of Art and Design, Dublin in 2016 with BDes(Hons) in Craft design. She’s been an international artist in residence at the London Clay Art Centre since  2017, where she teaches sculpture classes. Daumante has exhibited work in numerous shows and galleries in both Ireland and Canada. Her piece ‘Inflorescence’ was named Best in Show at Fusion’s emerging artist exhibition in 2018.

I’ve always been very much fascinated with the natural world and the unusual creatures with whom we share the planet with. Blurring the lines between reality and fantasy, the work is intended to instil a sense of curiosity and wonder in the viewer. I draw a lot of inspiration from natural history museums, and their displays. Pyrus I – II jars are from my line of ‘disfunctional’ functionware. As a mostly sculptural artist I find that even my attempts at regular pottery objects have a life of their own, and very distinct personalities. As I am not concerned with practicality, decorative aspect has a much bigger role in my creative choices.