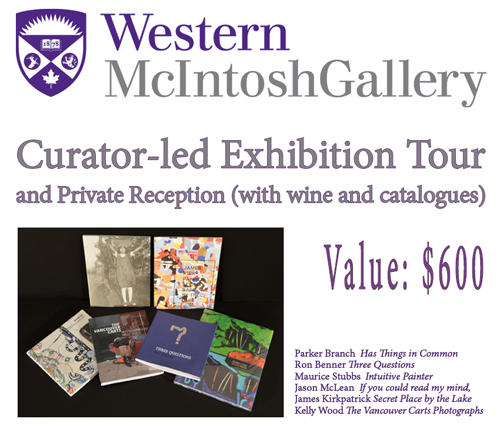 Join McIntosh Gallery’s Catherine Elliot Shaw for a curator-led tour of In the Beginning, 1942, and Behind the Lines: Canada’s Homefront during the First and Second World Wars. These two exhibitions on the theme of Canada at war celebrate Canada 150 and McIntosh Gallery’s 75th anniversary. In the Beginning, 1942 reunites for the first time a remarkable collection of war art that comprised our first exhibition in the summer of ’42, including works by Group of Seven members A. Y. Jackson, Arthur Lismer, and Frederick Varley. Behind the Lines tells the stories of Canadians who contributed to the war and how changing roles, especially for women, radically altered society. Following the tour, your party of up to eight guests will enjoy a glass of wine and hors d’oeuvres with Catherine and McIntosh director James Patten. Working with your schedule, this special event is available until June 25, when the exhibitions close.

Jason McLean: If you could read my mind, 2015
Parker Branch: Has things in Common, 2015
Maurice Stubbs: Intuitive Painter, 2015
James Kirkpatrick: Secret Base be the Lake, 2016
Ron Benner: Three Questions, 2016
The Vancouver Carts Photographs by Kelly Wood, 2016