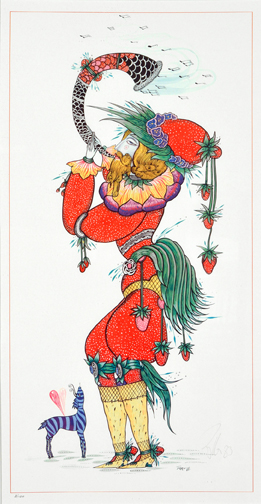 Toller Cranston was born in Hamilton, Ontario in 1949 and grew up in Kirkland Lake. He is truly a modern day Renaissance man: an Olympic medalist, Member of the Order of Canada, three-time world figure-skating champion, Canadian Athlete of the Year, Internationally recognized painter, illustrator, author, designer, choreographer, and sports commentator. Widely acclaimed as the most influential skater in the 20th century, who revolutionized men’s figure- skating. He introduced artistry and freedom of movement on the ice and took figure skating to new heights.

Cranston has been painting for almost as long as he has been skating; his skating and his art have always had the ability to feed each other. As an artist, Cranston is highly respected by his peers and has exhibited in numerous prestigious galleries throughout the world. He is represented on Ottawa, Ontario by Koyman Galleries and Terence Robert Gallery.

Sadly, Toller passed away on January 24, 2015, at his home in San Miguel de Allende, Mexico.

From the Collection of Pamela Samuels