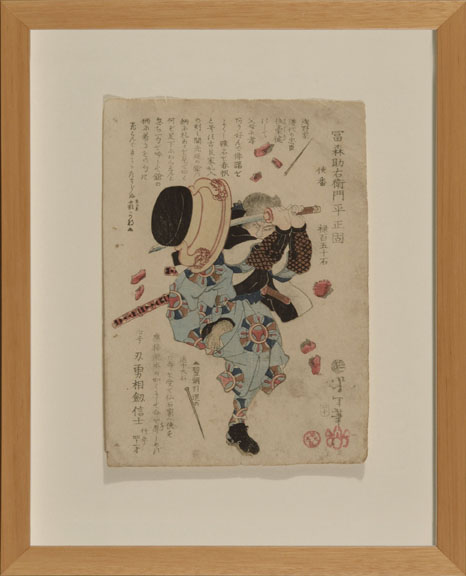 includes the accompanying novel “The 47 Ronin Story” which tells the tale of Japan’s most famous vendetta.

From the Collection of Wyn and Lucretia Geleynse

“This work depicts one of the 47 Ronin (Samurai warriors). The book is an account of their history and he is one of the characters; I cannot remember which one. It was one of the first historical artworks that I purchased in the late 70’s. I found the story compelling and the print quite vivid and active. If memory serves, there is a description in the book about what incensed the character to start swing that sword.

From the jacket text:

Here at last is an entertaining account in English of the historial mass seppuku (disembowelment) of the forty-seven ronin, or masterless samurai, shortly after the turn of the 18th century in the feudal Tokugawa days of old Japan.

The forty-seven ronin were ordered to commit seppuki for the vindictive slaying of a corrup court official whom they held ultimately responsible for bringing about the death of their master, Lord Asano. Asano was the brash young daimyo from the country who ignorance of and unfamiliary with the changing ways of the Edo court led not only to his own seppuku but also to the complete ruin and dissemination of his family and clan.

Though based on an actual incident, many details have been lost to history, and, as a result, several versions of the forty-seven ronin story have been told. But the fact remains that they were given the death penalty for their deed, which, at the time, so embodied the Japanese’s ideals of the noble samurai’s develotion to his lord that the forty-seven ronin were enshrined at Sengaku Temple beside ther beloved master. Thus came to a dramtic close the final chapter of what has been acclaimed the most famous vendetta in the annals of Japan.”