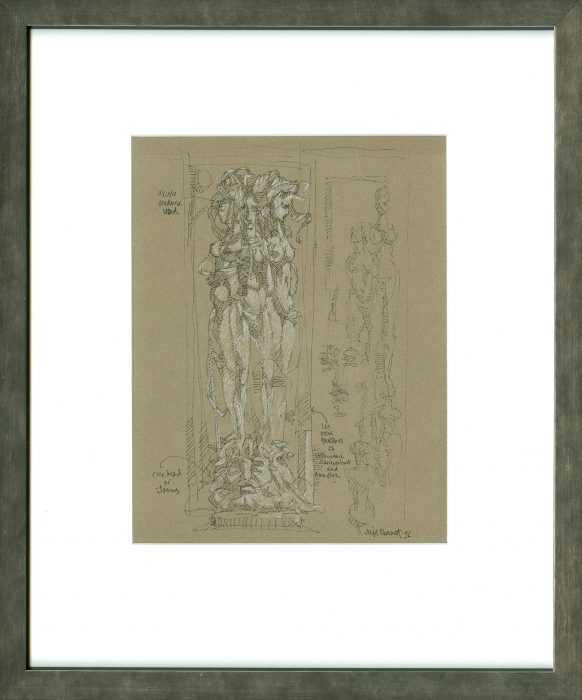 From the Collection of Marco and Sandra Balestrin

Virgil Burnett (1928 – 2012) was born in Wichita, Kansas. He was an artist, writer, book illustrator, Professor of Fine Arts at the University of Waterloo, and the founder of the Pasdeloup Press. He received a BA in Fine Arts from Columbia University, did his military service in Germany during the Korean War, and earned an MA in Art History from the University of California at Berkeley. He went to France on a Fulbright Fellowship in 1956, and stayed there until 1961, working with master printer Maurice Darantière, known for typesetting James Joyce’s Ulysses (1922). Upon returning to North America, he taught first at Chicago and then at Waterloo. He settled in Stratford, Ontario in 1973, but spent his summers in a small village in France, which became the inspiration for his collection of short stories, Towers at the Edge of A World (1983). Towers was followed by a novella, Comedy of Eros (1984) and another collection of short stories, Farewell Tour (1986), and several other collections of stories and poems. The Pasdeloup Press, founded in the 1960s, published the work of poets such as A.D. Hope, Daryl Hine and Rienzi Cruz, illustrated with Burnett’s drawings, and also produced tributes in word and image to the artists who had most influenced him: A Catafalque for David Hill (1986) memorializes a painter friend from the Paris days, while Edward Melcarth: A Hercynian Memoir was dedicated to the painter and sculptor who had had a profound effect on him as a young man in New York. Burnett illustrated a series of books for the Folio Society, the Limited Editions Club, and other small presses, as well as producing broadsides throughout his career. In the 1990s, he turned to sculpture, specializing in terra cotta renditions of the female form.

Title:
Studies for the Three Graces